Building a Brand, Block by Block

This story ends with our co-founder, Mark Palmer, getting a bear hug from the co-founder of Rozas Ward. It’s not often you see hugs exchanged in business. And it’s definitely not often that anyone wants to hug Mark (that beard just gets in the way). But before we get to the end of the story, let’s start with the problem: A business card.

When to Bail on Your Bland Brand

Mark met with the co-founders of Rozas Ward, Charles and Darren, several times before the project kicked off. The duo were two young architects who had worked their way up, founded their own firm together, and were making huge strides with a good-sized team in New Orleans. If you know anything about NOLA, you know it’s a culturally rich place with deep historic roots. That remains true for the architectural firms, too. While Darren and Charles had built a firm with 25 years of experience, it paled in comparison to some of the firms with a century-long history.

The progressive and young Rozas Ward team had grown, and they were using cutting-edge software to show clients work, but the brand felt boring and outdated. In fact, during our brand discovery, one member of the team told us he disliked the company’s logo and branding so much that he never gave out his business cards. If anyone asked for a one, he’d say he had forgotten them. We couldn’t let that stand. 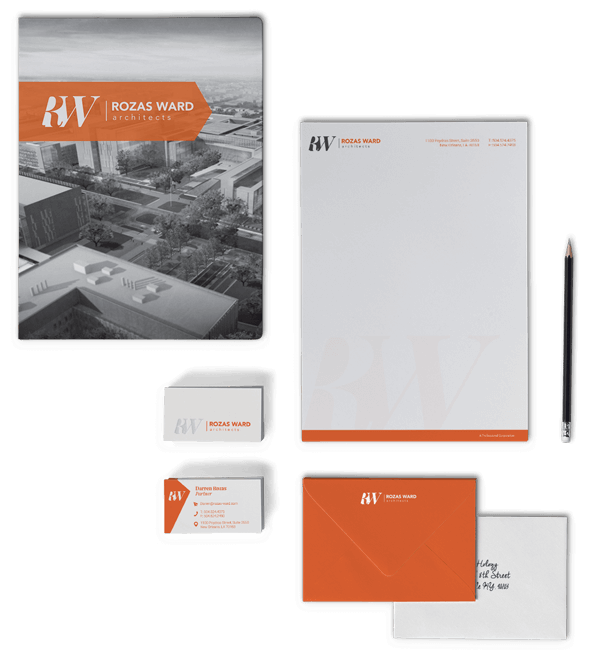 Our discovery shed a lot of light on Rozas Ward’s unique positioning within the market. We found their relationships with clients to be so strong that clients never left, so we positioned them as the “last architecture firm you’ll ever need.” Our creative team also wiped the slate clean and moved away from the logo and the aggressive color palette of reds and blacks. Instead, we introduced an orange that felt warm and inviting, just like the Rozas Ward team. We also implemented design elements, such as arrows and sharp angles, to evoke feelings of sophistication. In place of the old logo, we created a beautiful new mark that showcased an interlocked R and W, representative of how integrated Rozas Ward is with its clients. 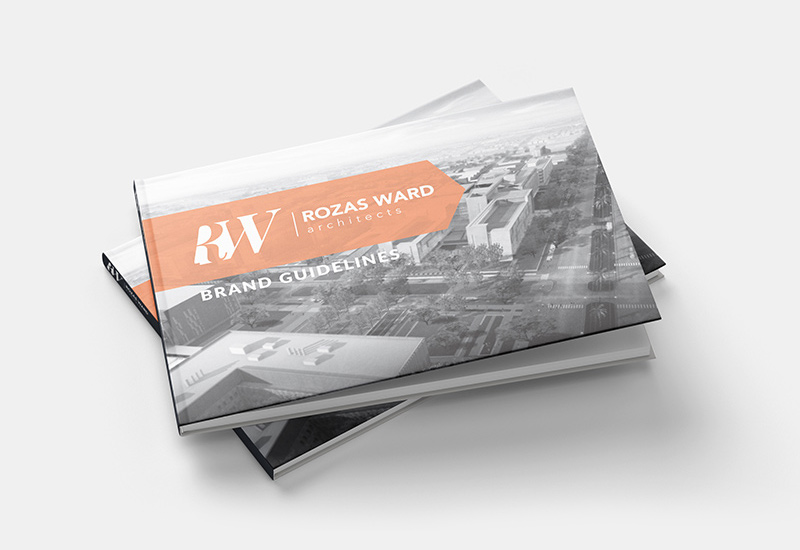 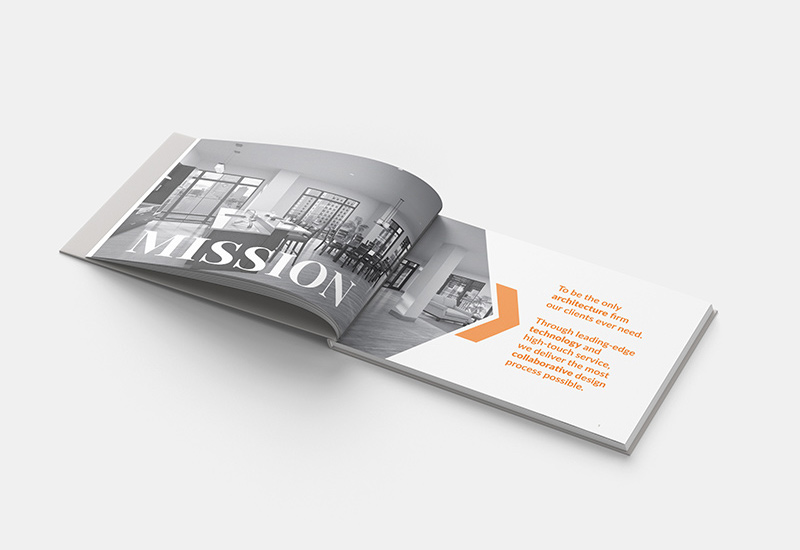 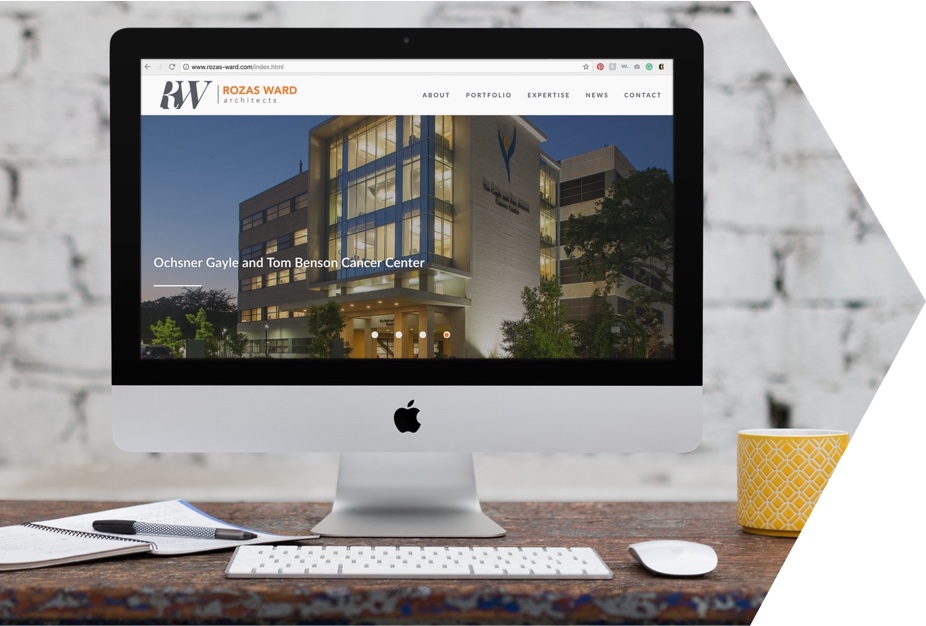 Rolling it Forward to Web

Once the brand was established, we moved ahead with web design. We kept this project with the same team through each phase of the process, from wireframes and design to front-end development, which allowed us to move quickly and seamlessly. While this took a great deal of trust from the client, it also gave us the leeway we needed to execute certain aspects of the site without exhausting our available hours on granular revisions. 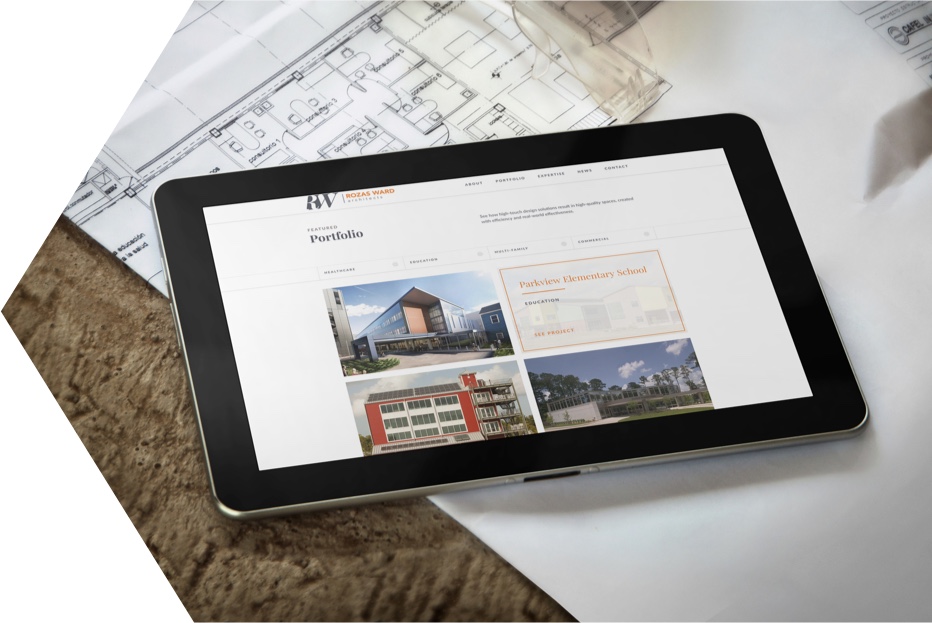 The end result was an absolutely stunning website, complete with animated icons, a robust filtered case study section and a fun team bio page. It was fantastic to see all of this great branding work come together, especially knowing we had finally given Rozas Ward any online presence that matched their real-life dynamic.

After the project, Mark just happened to be in New Orleans and stopped in to say hi to Charles. Upon seeing Mark enter the building, Charles walked up to Mark and gave him a bear hug. Mark asked him what that was for and Charles didn’t say a word, but led him to a window looking out over the city from the 35th floor. “We just won the largest project we’ve ever had — it’s a multi-million dollar hospital that’s the size of that entire block.” Mark looked at Charles and said, “That’s awesome man, but what was the hug for?” Charles smiled and said, “It came down to us and three other firms, and the client said we were all the same across the board. Great work and experience. But when they considered how tight our own personal brand was, they knew that if we put that kind of effort into our own work, that we would do even better for them. The branding was the difference in winning the job.”

We’ve always known that this happens. People judge brands by their cover every single day. But we’ve never had a larger acknowledgement of the impact of our work. We’re so proud of Charles and his team for earning this project, and we’re proud to have played a role in that.